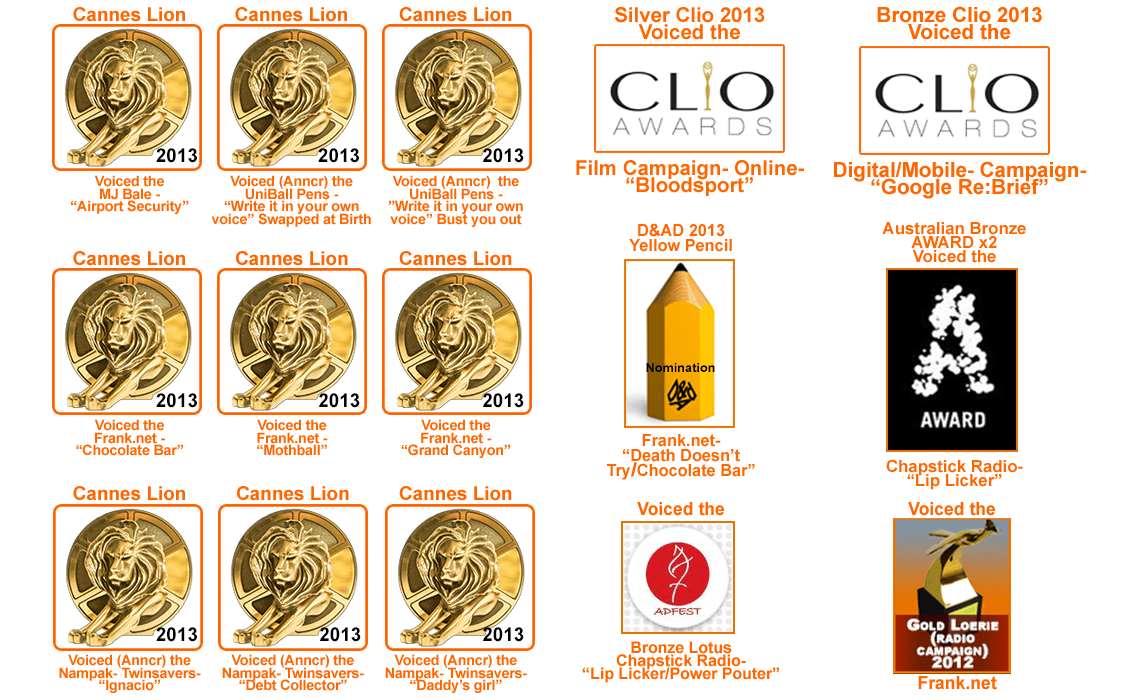 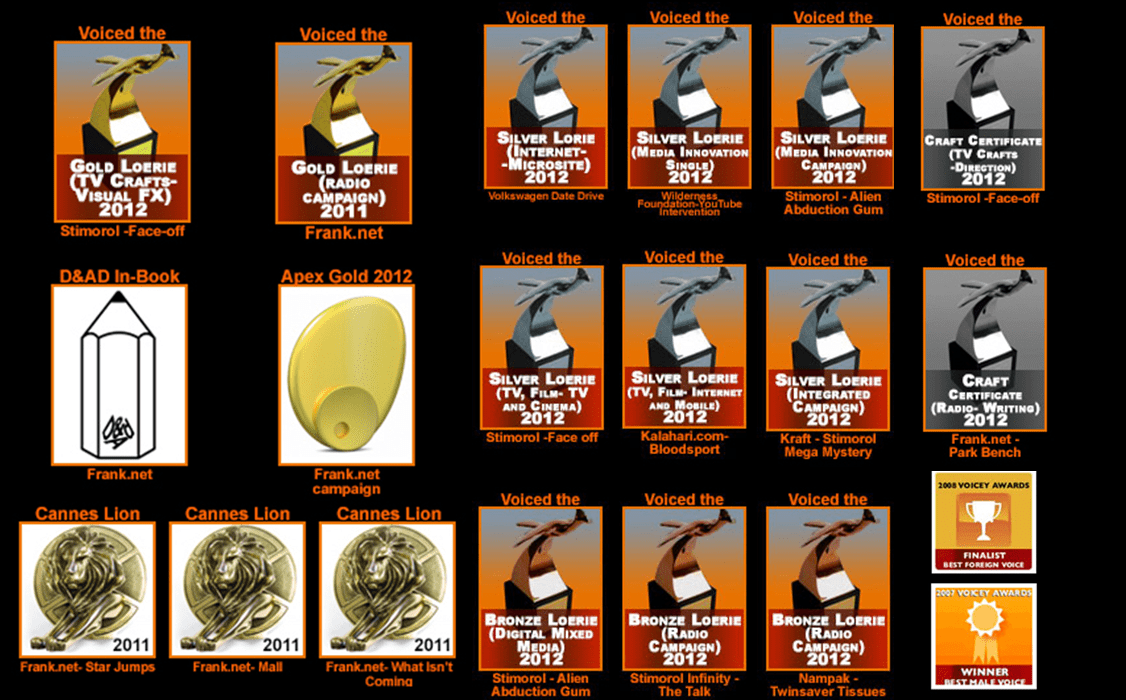 Adam is an exceptional Artist, with incredible talent and extremely versatile. We hired him needing an actor’s voice with a South African accent for a presentation to a very important client of our company. His response was immediate. When contacting him he had already recorded his first demo with our script! Although it was very good, we needed the voice to have a different character, different from what he had proposed. As soon as I mentioned it, he understood our need perfectly, despite my difficulty in expressing things by mail or phone and in English (in Argentina we speak Spanish). The next day I received his work, it was incredible! Just what we had in mind! And I assure you it was not easy. Super talented, professional and very cordial and friendly! Thanks Adam for bringing us your talent.

Adam is a consummate professional and we were impressed by his flexibility and the speed of his turn-around on projects. We’re used to working with talent face-to-face of recordings, but with Adam’s speed and talent, we felt perfectly comfortable working with him remotely.  We wouldn’t hesitate to recommend him and his work.

When they played in a Huge hall is Germany.  Your voice attracted almost every one passing by. The Video won best presentation at one of the biggest maritime events in the world.

CEO & Director, Mind Over Magic Studios
I’m an independent filmmaker and the one thing I never have to worry about when working with Adam is “Is he going to come through for me this time?” or “Is the dialogue going to be ready when I need it??” – EVERYtime I’ve worked with Adam I receive my voice before expected and (get this) it’s always one shot/one kill. I should start calling him “the sniper” because he never misses. So far I’ve come to Adam for goons, thugs, russian mafia guys, ethnic accents, the works and he nails it everytime. I’m very impressed with his work.

In the business world, every once in a while, you have the pleasure to work with someone who exceeds your expectations by a country mile. Adam is one of those rare people. Communicating ONLY by email, he delivered a splendid voice-over in record time.

Our very first contact and introductory email was in the morning. The details, script and performance document completed by late afternoon and by that same evening Adam delivered a full 16 minutes of dialog – (commercial runs 2 minutes). We were happy to make full payment with a bonus the same day.

If only all of our creative adventures could go this smoothly. Thanks to Adam the commercial was completed a full week ahead of schedule and the client is thrilled. We can’t wait to work with Adam Behr again – it will be fun and trouble-free.

Director LewesPictures.com Creating compelling content for the Internet and beyond
Adam is terrific to work with – he’s sensitive to the needs of the project, and provides fast turnaround. I’ve had so many positive comments about his narrative! Definitely recommend.

Adam Behr was very professional, flexible, with a quick turn around time. Obviously he has a great voice with great range, but his positive attitude stands out more than anything else!

Executive Producer In Altum Productions
Adam is an exceptional artist with incredible talent and much versatility. He was hired when we were looking for talent with a South African accent for our campaign. His response was immediate, within the hour of contacting him, he’d sent over a demo to our script! It was a well presented demo, however we needed the voice to have a different character then the one he had initially offered in the demo. As soon as I mentioned this to him, he understood exactly what we needed, even though a few odds were stacked against us such as, having to give direction via email and telephone in English when in Argentina we speak Spanish. The very next day I received his work, it was incredible! Exactly what we had in mind! I can assure you this was far from easy. Super talented, professional and very cordial and kind! Thank you Adam for offering us your talent.

Owner of Animalmusic , A music production company based in Argentina, with studios in Miami and Mexico
We were extremely impressed with the voiceover Adam provided for our short film. He required no direction and delivered a great quality recording for our project. We would definitely be pleased to work together again!

Adam’s versatility and professional attitude were a godsend to us. He really understood our project and quickly delivered exactly what we needed. I’m looking forward to work with him again!«

Adam Behr has a unique and distinctive voice. He demonstrates great voice technique and an ability to quickly follow direction. He is always on our first call list and I would highly recommend him to anyone seeking to raise their project to the next level. Adam is a world class voiceover talent.

We were very impressed with Adam’s professional attitude. He was very easy to work with, and was able to capture the feeling we wanted very quickly. His voice is amazing, we got numerous positive comments on it. We would love to work with him again.

He’s versatile, a pleasure to deal with, and a true professional.  Simply put, Adam Behr is dedicated to getting the sound you want.

Once or twice in my career as a Hollywood agent and now, as a leading Voice Over coach, I get to share in the growth and success of a true Star.  I am proud to say that the most unique of these rare finds is the mold-breaking, deeply gifted, wickedly silly, crisply professional, worldly avant-garde human jukebox, Adam Behr. To me, he is the definition of what it means to be TALENT.  And – oh yeah – that voice is just deliciously sexy.

Adam Behr’s outstanding voice talent and professionalism allowed us to create an inspiring game trailer that captured the essence of our flagship product EVE Online. With his voice, we were able to achieve the exact degree of perfection that we were looking for.

Adam Behr is a real asset for our company. Being a travel show for high-end hotels, we need sophistication and distinction and that is what Adam Behr delivers. He has excellent range as well which makes him suitable for a wide variety of projects. Plus, he is professional, reliable and outstanding to work with Every time I ask him to do something for me, he delivers plus extra. Every producer needs an Adam Behr!!!

I wanted to let you know how pleased my distributor and I are with the narrator we found! Adam Behr delivered an incredible performance for our documentary! The quality of his recording studio was as high as any studio I’ve worked with in Los Angeles. Though we were in different countries, we were able to work well and in a timely manner using the phone and internet. Adam was wonderful to work with and really came through for us. I would recommend him, and your service to anyone in need of top-notch talent. Thank you!

Adam is not only a top-notch voice talent, but his versatility makes him incredibly responsive to direction. He was an absolute pleasure to work with.

Adam Behr is one of the most versatile American voiceovers that I came across in my search for voices. He is able to transform into other characters like no others and is also able to deliver any content in the right emotional state. He has a magic voice.

Adam Behr is an Award-winning international voice artist, with a 20 year background in media and entertainment. He holds a Post graduate degree in Dramatic Arts, and numerous other certificates for Voiceover course training.

Adam is a very versatile voice performer, working in many different mediums of voice-over, including Animation, Promos and Movie trailers, Documentaries, Audiobooks, Commercials, Industrials, Corporate I.D.’s, IVR and messaging, and a multitude of other media applications. He is the signature voice of various products and channels, including Bio-oil, and the Afrotainment channel. His multicultural, multi-ethnic voice acting approach is as valued by clients as his “Global” accent, which transcends borders to speak to the world in one, unbiased voice.